Apparently I've now had one breakup too many and the universe has decided that it's time for me to become a crazy cat dude.

I went to frisbee practice at UFMG on Tuesday night, and when I go there, there were two kittens just running around playing with anyone who would give them attention. They were tiny - about the size of your hand, and couldn't be more than about 45 days old. We looked around for a while and couldn't find mama-cat, anyone that might be an owner, or anything about where they came from. They were just there. At exactly the spot I got out of the Uber. Like they were waiting for me.

I couldn't just leave them there. But I also had a practice to run. So I changed from my running shoes into my cleats, and used the shoelaces from my runners to tie them up to one of the backpacks. We gave them some water, and eventually a friend of one of the players managed to get some milk (which I found out afterwards they were too old for, but I didn't know that at the time). After practice I called an Uber and after explaining that I had two rescues (thank goodness he was ok with that!) I put them in one of the reusable shopping bags I had for gear (fortunately I had two!) and off we went! 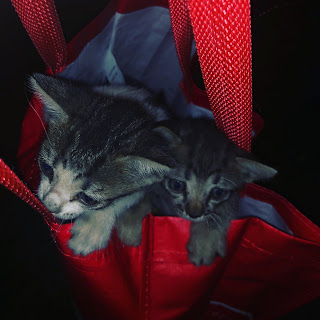 I got home around 23h, tired, hungry, in need of a shower, and with two little mouths to feed! So off I went to the local 24 hour drugstore, and scored a kit with a litterbox, scoop, and bowls, litter, and kitten food. Back at my place they devoured the food. They were clearly hungry!

Now I have two kittens at my place, and they are adorable! (see the album with all of the pictures and videos if you want proof) The amazing part is that they seemed to be in good health and very friendly: they would accept anyone picking them up, and were generally playful. I'm guessing they're sisters, because from the moment I found them they were inseparable! 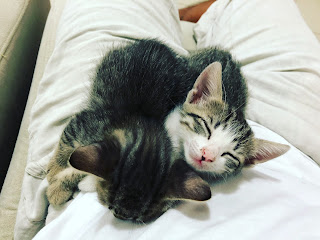 Now comes the hard part: what do I do with them? A colleague has offered to give them a forever home... but I honestly really like them and I'm very tempted to keep them. Problem is that I travel a lot and there will come a day that I'll leave Brazil, and I don't know if I'll be able to take them with me. Another friend has offered to take them if it ever comes to that.

Speaking of decisions: they need names! I've been calling the lighter coloured one Teimosa, which means "stubborn" in Portuguese, though really she's more "aventureira" (adventurous). The darker one I've been calling "Brava", but really she's just more willful. If she doesn't want attention (like on Tuesday night when I got her) she'll hiss. But if she's enjoying your company she'll purr.

So apparently I'm now acting out scenes from Gilmore Girls... 'cause this pretty much sums it up:

Getting Your Driver's License in Singapore